STORM INFO Shelter to Open in Morro Bay For Residents Displaced by Storms Read On... Storm Recovery Guide Read On...

About Morro Rock Beach
Morro Rock, a State Historic Landmark, was formed about 23 million years ago from the plugs of long-extinct volcanoes. Morro Rock was an important navigational aid for mariners for over 300 because the rock is approximately 576 feet tall which made it the most visible in a chain of 9 peaks. Portuguese explorer, Juan Rodriguez Cabrillo named the rock "El Morro" in 1542. In Spanish "Morro" means crown shaped hill. Morro Rock, sometimes called the "Gibraltar of the Pacific," is the last peak of the Nine Sisters, which extend from San Luis Obispo to Morro Bay.

The rock itself was mined on and off until 1963. Morro Rock provided material for the break water of Morro Bay and Port San Luis Harbor. In 1966, a bill was introduced which transferred the full title to the State of California. Later the San Luis Obispo County Historical Society and the City of Morro Bay succeeded in getting the Morro Rock declared as California Registered Historical Landmark #821. Morro Rock also became State Landmark #801 in 1968. The rock has since been designated a bird sanctuary for the peregrine falcon and other bird species. 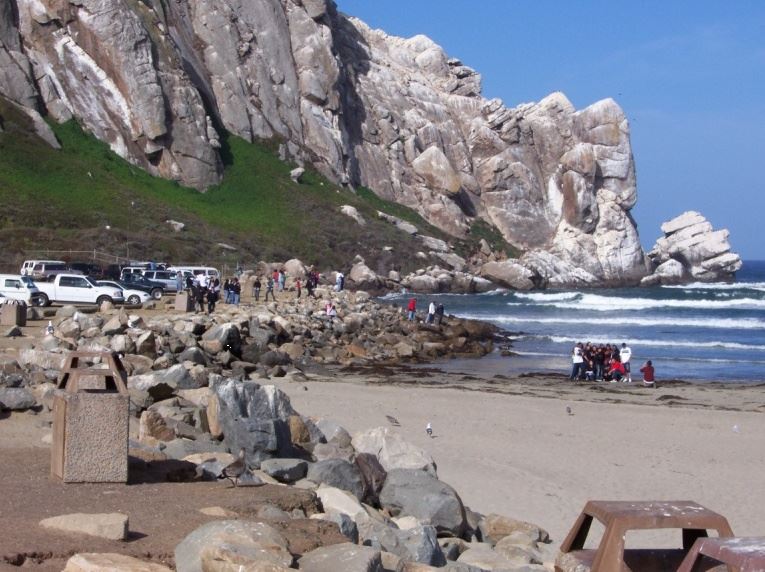 Amenities
Morro Rock is a beautiful Northern California Beach with a rough ocean environment and sandy dunes. This park/beach is often used for commercial shoots, weddings and festivals.

During the summer months, from roughly Memorial Day to Labor Day, the Morro Bay Harbor Department staffs 2 lifeguard towers on the City Beach. Lifeguards are on duty from 10 a.m. to 6 p.m. , and beachgoers are always encouraged to consult them before entering the water. Always swim near a lifeguard.